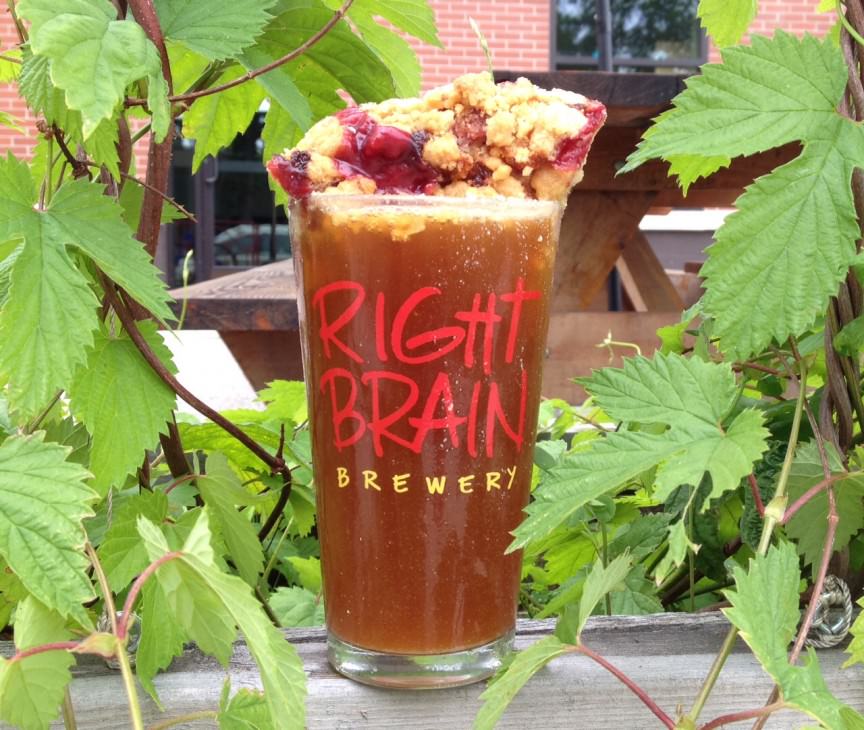 The team at Right Brain Brewery prides themselves on their high quality beers and welcoming atmosphere. From parties, to book signings, there’s never a dull moment at this brewery. After visiting Right Brain, it is crystal clear why this Traverse City brewery is not only the talk of the town, but also the recipient of so many amazing reviews and acclaimed awards. Some say the magic behind this sought-out brew haven is the beer alone. Other patrons swear that it’s the people, both the staff and clientele, who keep Right Brain alive. I feel that this brewery owes its popularity to the combination of both – the beer and the people.

Apart from the mouth-watering guacamole and waffle sandwiches… yes you read that one right… waffle sandwiches, Right Brain Brewery has a lot to offer the community. I spoke with Joseph Symons, the brewery’s Events Coordinator, to get a better idea of how Right Brain operates and what makes the brewery so special. Enjoy this interview with Joe!

A lot of breweries are “culinary inspired”, and experimental beers are a lot of fun. At Right Brain Brewery, we brew culinary inspired beers that make sense. Our head brewer, Nick Panchame, has a culinary background, which gives him the ability to pair traditional styles of beer with unique, but sensible and real ingredients. Our Cool Hand Cuke is a Belgian ale brewed with fresh cucumber and basil. The sweet, earthy notes from the Belgian yeast pair perfectly with the refreshing taste of cucumber. Our Cherry Pie Whole Amber Ale is brewed with 80 real cherry pies. For the record, we’ve tried this process with apple pies, pecan pies, and blueberry pies and they are all awesome! The pies are placed in the fermentation tank, and the amber ale rests on top. The result is an amber ale bright red in color, tart with subtle notes of cherry, and just a hint of buttery crust.

I know it’s a cliché, but this is just the tip of the iceberg. We brew an ale with asparagus (Spear Bear). We brew a porter with smoked pig bones (Mangalitsa Pig Porter). We brew with biodynamic mint and lavender. We use Michigan Honey and Maple Syrup. Right Brain Brewery doesn’t use flavorings, extracts, or syrups, nor do we filter our beers. If you’re enjoying a Right Brain brew, you can trust the flavor in your beer came from a REAL ingredient. Our motto is “Keep Beer Curious”, and curious beers are brewed with curious ingredients! What is your favorite part about working at Right Brain?

The beer! Even before joining the Right Brain Brewery team, I was a huge fan. Each beer is well balanced and extremely drinkable. Sometimes you’ll order a flight, taste one, and say, “Well, that’s pretty good. I like the sample size, but I could never do a pint”. That doesn’t happen at Right Brain. Each beer is well suited for a pint.

Aside from the beer, working in the Craft Beer industry is amazing. Traverse City’s economy depends on tourism, and Right Brain Brewery has become a popular destination. I’ve met craft beer fans from all over North America in the Right Brain Brewpub. A Brazilian couple served our fall-spiced amber (Chubby Squirrel) during their Northern Michigan wedding last September. The notoriety is humbling, but it’s not just Right Brain. Michigan beer is taking over!

What is your favorite event to host at Right Brain?

That’s tough! I think our beer releases stand out. Tying into the previous question, each beer release brings customers from all over the country, which is always fun. We generally have live music, and the artists are usually local. We have a ton of space for dancing, but still plenty of seating for those looking to relax. Our Chef (Mike Meador) will usually prepare a dish inspired or made from whichever beer is being released, and that’s always a treat. Plus, from an employee’s perspective, beer releases are usually our first chance to enjoy the beer, too. We’re just as excited to get some as the customers.

Right Brain Brewery does not charge for the space. We allow groups to accept donations at the door and silent auctions (with written permission from the Gaming Commission). We never take a cut from funds raised. Northern Michigan is an amazing place, and we don’t want to be in the community; we want to be a part of the community.

Is there anything unique about your location?

From a geographical standpoint, we have a number of advantages. For starters, the water! It’s literally the cleanest and freshest water source in the world and creates high quality beer. Our proximity to water also creates a proximity to a unique agricultural market. We’re basically on the 45th parallel, one of the most fertile latitude points on the planet. In the spring, we brew an asparagus ale, which utilizes fresh asparagus grow less than an hour from the brewery. Northwest Michigan is also home hundreds of acres of hops. This allows us to brew some amazing wet hopped IPAs during the hops harvest. Cherries, grapes, maple syrup, honey, and dozens of other farm goods are bountiful in Northern Michigan.

How do you engage and interact with the surrounding community?

As stated above, our Brewpub is open to the public. We don’t change for use of the pub, which makes Right Brain a unique place for fundraising and community outreach initiatives. Community agencies we’ve been proud to work with the past include: