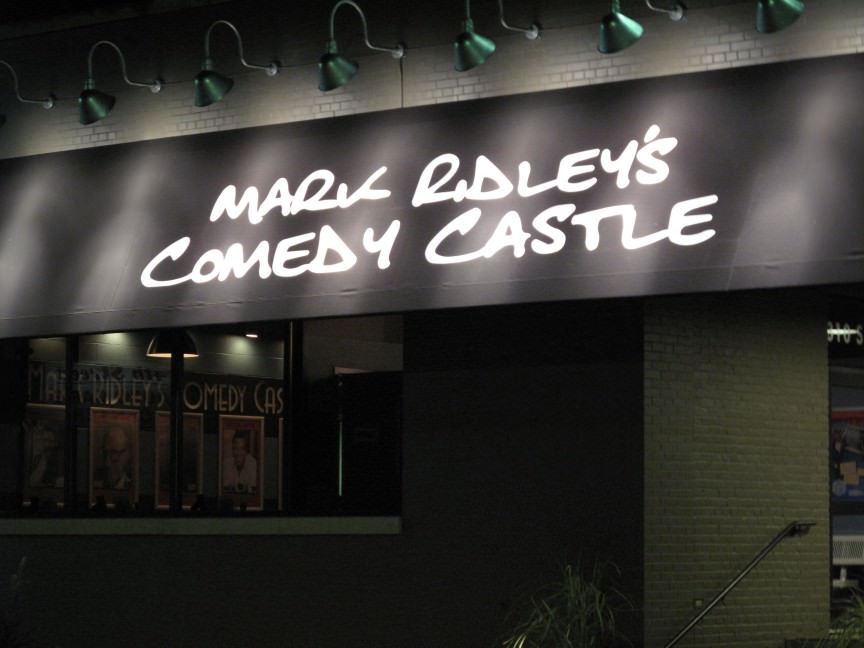 Many comedy fans know Mark Ridley’s Comedy Castle as one of the oldest comedy clubs in the country. Others know it as the starting point of a long path that many successful comedians have walked. Mark Ridley opened the Comedy Castle in 1979 and is one out of a handful of original club owners that are still up and running in the comedy business today.

I can’t fight the urge to name drop, as the Comedy Castle has seen more than its fair share of successful comedians, including Tim Allen, Ellen DeGeneres, Jerry Seinfeld, Jon Stewart, Jim Carrey, Jay Leno, and Ron White (just to name a few). The club’s wall of fame illustrates thirty-six years of history with over 300 photos! In the same year Mark opened the club in Royal Oak, Michigan, he developed a specific three-tier comedian format that he uses for his shows. This format features an up-and-coming MC for the first tier,a seasoned middle act for the second tier, and , a nationally recognized headliner for the third tier. To this day, he handpicks the club’s talent and has developed the skill of finding the freshest and very best talent available.

What is the biggest challenge you face while running a comedy club?

There’s a stigma that is attached to comedy clubs; people go to a comedy show thinking that they will interact with a comedian and have control over how the show will play out. This can often result in a few people getting out of hand and ruining the show for the rest of the audience.

We do everything we can to put on the most professional show possible. We appreciate our audience; we’ve got a great following! However, it is our job to put on the show and their job to sit back, relax, and have a good time. We treat our club as if it is a theater. Just as a member of the audience wouldn’t interact with an actor performing in a play on stage, we ask that our customers treat our comedians with respect, as if they are in a theater.

What is your main goal for the shows at Comedy Castle?

It’s simple; we want people to come out, have a great time, and walk away with an awesome experience! What is your role and how has it changed over the years?

I am the club owner, however, I was also the MC for fourteen years. I was excited to pass that role on to someone else because my main passion is observing the new talent and comedians develop. Now, at our open mic nights, I can be part of the audience, take notes of who is making progress, and put them on our stage in the future.

What characteristics do you look for when booking a comedian?

When I’m looking for a performer that I want to help move up the ladder, I take note of a few key things: originality, likeability, professionalism, and his or her ability to connect with the audience. The opening act is especially important because it sets the tone of the whole evening.

Finding someone with all of these qualities can be tricky. Just because a comedian is great on the stage, it doesn’t mean that his or her sense of professionalism translates to stellar interaction with people off stage. I make it a point to choose people that are respectful to my managers and the entire staff that work here.

What does a typical week at the Comedy Castle look like?

There’s something here for everyone. Thursday, Friday & Saturday nights feature our headliners and every Wednesday is Open Mic Night! Sunday through Tuesday, the room is open for rent. We offer it up as a blank canvas to charities or fundraisers looking for something a little bit different. From R-rated to faith-based comedians, we help the organizations book any type of comedian they see fit. There are around forty fundraisers each year that use our club as their venue!

We’ve also got a couple other items on the agenda including our stand-up comedy classes and improv workshops. There are two different kinds of classes, each taught by local comedians. Bill Bushart teaches stand-up 101 for beginners which focuses on writing and performing stand-up comedy. After you’ve graduated from that class, you are invited to enroll in Joel Fragomeni’s advanced class.

The Workplays Improv includes private training in improvisation for companies and teams in the area. Training is lead by Karen Bell-Brege, who studied improv at Second City and been active member of the improv community. Through her team building “playshops”, people can learn how improv is an antidote for negativity and how it breaks down barriers.

Do you have any advice for people who want to enter the comedy club scene?

I encourage comedians who are trying to set up shows elsewhere to concentrate on making it as much of a professional show as possible and to focus on developing their comedians’ talent. What’s coming up that comedy fans can look forward to from Comedy Castle?

I’ve got us booked all the way through 2016 and we have some big names and great shows coming up. We always update our followers when someone big is popping into town, or if we book big headliners at the last minute.