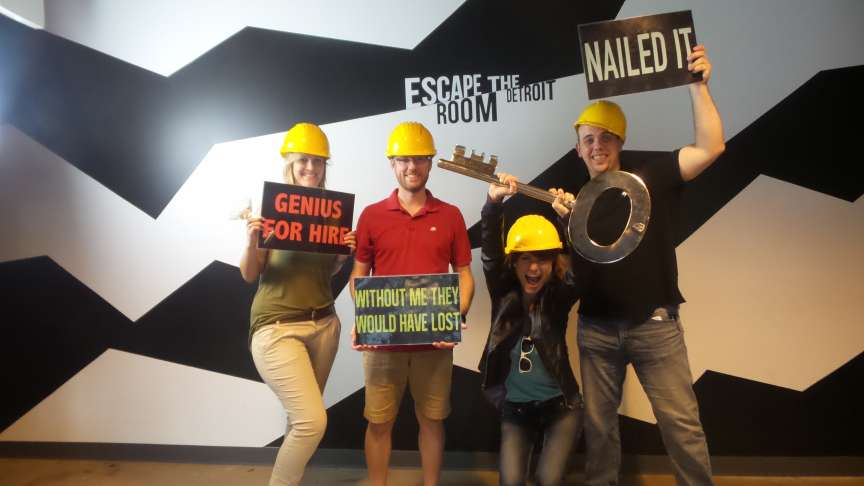 Have you ever done an Escape Room with a group of people you just met? Or maybe your group of four gets paired with two couples on a double date. You’re all in it together now.

Even if all the people in your group have been friends for years, it’s fun to watch the different personalities and roles that emerge when you’re locked in a room with the clock ticking. Who takes the reigns? Who has a meltdown? Who surprises you with their master puzzle-solving skills?

Read on for the eight people you’ll find in every escape room. Which one are you?

They’ve done escape rooms before and know how this works. Likes to take charge. Makes sure you designate a “used” clue table. Sometimes hogs the whiteboard.

A very serious board game player, the coach cheers on the whole group but has a meltdown when a rookie messes up one of the clues. Refuses to give up with one minute on the clock and five puzzles left to solve.

There’s always one player who is really, really focused on a clue that the rest of the group has already realized doesn’t mean anything. Will continue bringing up said clue and try to use it in every puzzle.

Loves puzzles, crushes the Sunday crossword and occasionally races through Sudokus to stay sharp. You’ll need their expertise anytime there’s a clue in Latin or an obscure trivia question.

They aren’t really working on any puzzle in particular but jump from small group to small group, hovering in the background and trying to figure out ways to help. This happens particularly when you have a large group and not enough puzzles to go around.

This player quickly gets intimidated by the pace and complexity of the puzzles. Tries to help for a while. Now they’ve quietly given up and snuggled in a corner with one of the decoy books.

They might seem quiet at first, but this player has a sharp eye for finding clues or recognizing that there’s something odd about one of those light switches that holds the key to a puzzle. Starts to come out of their shell after they find those first few clues.

A whiz with combination locks. Owns a bike and regularly uses lockers at the gym. This player will help you crack that six-lock treasure chest in no time.
Do you see yourself in any of these Escape Room personalities? Let us know in the comments or tag a friend who would appreciate this!