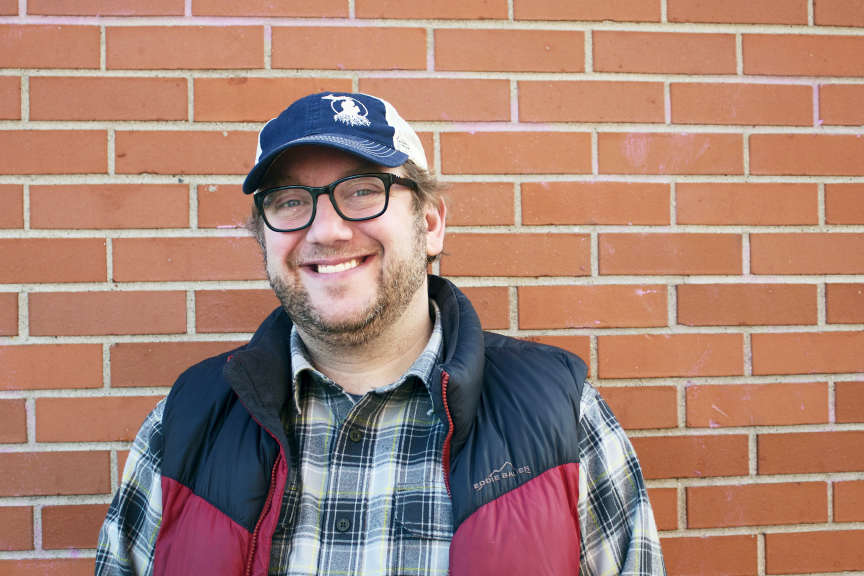 Pj Jacokes is an improv legend. He has been in the improv comedy biz for 20 years with performance credits ranging from Second City to Improv Inferno. For the last 6 years he has run Go Comedy in Ferndale, MI, packing the house for 15+ shows a week.

I caught up with Pj last week for some huge tips on starting a venue, engaging a community, and keeping fans coming back for more. Here are a some helpful tips to keep in mind!

1. Actively Engage and Accommodate Your Community

“We want everyone to feel as comfortable as possible. We know that we can’t please everyone, but we can try.”

For example, at the GO! Bar, there are a variety of drinks that appeal to a wide range of taste buds. From PBR, to local mead and Michigan IPA, there is something for people of all walks of life to try.

“We want to extend an invitation to everybody by building up the Detroit improv community. The more people that go through our classes, the more people that love it and want to watch it.” Pj acknowledges that there wouldn’t be a show without someone to call out a suggestion or a topic. He says, “the audience gives us the show every night and we work really hard to respect them for that.”

The unique composition of every audience is what makes each night its own special experience. No show can ever be re-created exactly as it was when it was performed. There’s something magical and powerful about watching art as it’s being created. Pj encourages event planners to recognize, take pride in, and market the unique features of their events.”

Two philosophies Pj and his team live by are: Stay Positive and Say Yes. He says that if you keep these two in the back of your mind, you can get way more accomplished without wasting a ton of time, or a crazy budget.

“When we were getting our liquor license, I decided to represent Go Comedy instead of hiring a lawyer. When the guys and I got to the courthouse, there was another business filing for a liquor license as well. The only difference was, they had a professional lawyer along side them. When our turn came to speak and present our paperwork, I went through everything thoroughly with the judge and was granted the license. The next company proceeded with their lawyer and was not granted their license because of a few minor details they had overlooked. After the hearing, the company’s lawyer approached me with her business card saying, ‘I noticed you don’t have a lawyer.’ I smiled and responded as politely as I could, ‘Yes, and I noticed you don’t have a liquor license.’”

In addition to his philosophies, PJ lives by the following admirable rules: do not take the easy way out, pay attention to detail, and trust your gut.

These rules are not only the driving forces behind Pj’s business decisions, they also act as guidelines for operating on stage. “Trust is everything in what we do. If you’re on stage with 5 other people, you’ve gotta know that they’ve got your back. Nothing can be created if everyone is trying to have the best idea.”

The corporate work consists mostly of workshops held for anyone from elementary school groups to fortune 500 companies.

People will not only respect you more when you listen, but you’ll be able to better connect with your potential client, instructor, and audience when you actually hear what they are saying.

“It’s fun, no matter who we’re teaching. There are lessons hidden in every sketch.” These lessons include communication, teamwork, thinking fast, and most importantly, listening.

“Listening is important for any team out there. We do exercises that show people what listening really means. Unless you’re hearing every syllable of what I’m saying, you’re not really listening.”

Pj advises anyone looking to become more confident to “Kill their internal editor.” The “internal editor” refers to the nagging voice that lives in the back of your head who shoots down ideas before they can come to fruition. His job is to get his students, and audience, to understand that anybody can do improv.

“When we were kids, we improvised all the time. Then, sometime around high school, we started trying too hard; we stopped pretending and focused on getting everything right. With kids, there’s no voice in the back of their head saying, ‘That’s not a dinosaur.’ The only thing they’re thinking is ‘We’ve gotta run!!!’ Most adults have lost the skill of living in the moment and not editing themselves.”

He refers to improv as a skill, because it actually takes training and practice to let yourself use your imagination without judgment. “People say to me all the time, ‘Oh I can’t do that.’ I tell them, ‘Yes you can, you’ve just spent the last twenty years talking yourself out of it.”

With over 70 performers, the founders of GO! have made positive changes to get to the point where people are not only inspired to be passionate, but practically need to be.

“There was a time when we were simply handing out an overload of opportunities for people to be on stage. It didn’t work well for anybody because no one took the opportunities (as great as they were) seriously or viewed them as special. Now, we encourage our community to come to us with ideas. If you want to write a show – great! Write and submit it [for review]. We’ve established an environment that is abundant in opportunity, but not excessive. In even the past 6 months we’ve seen huge growth in improv. To see that happening makes me really happy.”

PJ says that when he started out as an improv performer, he did whatever he possibly could to get on-stage experience. He attributes his success to trying new and different techniques and learning from what most people would identify as “failure”.

“Get out there and fail. You have to be fearless when it comes to failing.”

Improv = Creating something from nothing with the goal of making it work.

“No matter what happens, we can make it work.” In the past 7 years, Pj has found that most of the time he can stay positive and adjust to the madness that tends to occur around crunch time. His secret: let go and just do it! He referenced a Lorne Michaels quote to clarify his point, “The show doesn’t go on because it’s ready; it goes on because it’s 11:30.” However, it took Pj years of practice to get to the point where he was able to let go of perfection and expectation. He has two rules that have kept him grounded throughout the years:

Looking at yourself in a negative light benefits no one and worrying about the distance between you and your goal is not productive. Instead, accept yourself and continue growing by looking forward and trying to be better at what you do. Pj’s favorite students are the ones that are there to become better versions of themselves. Those are the individuals that not only develop into the most outgoing and confident people, but also the most compelling leaders.

To experience the magic of Go Comedy yourself, check out their website and don’t forget to grab a ticket to one of their latest shows, Fuzzballs: Comedy with Puppets or Monthly Living with Human Amusements!